…well, the absolute, absolute latest is that WordPress managed to cleverly interpret my desire to insert a photo into my post as deleting the said post and replacing it with the bloody photograph, so this is the second time round on writing this, as midnight approaches and tiredness sets in. Goodness knows how it will read. Anyway, this is the picture in question: 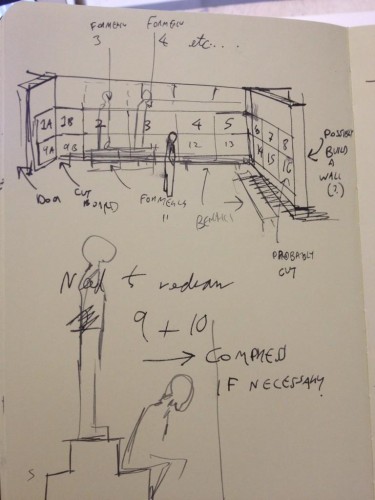 I’ll explain what it is further down the page, because that’s how I roll. The Duke Street Diaries give a day by day account of how things are currently progressing, so they are the best place to keep track, alongside the associated Facebook page and twitter alter ego (not the same as the usual Dialectograms feed). If that’s not already way too much information, you can of course, just pop in any time between 10-6pm, Monday to Saturday over the month of November and first week in December.

But between us, how has it been so far? Challenging, it has to be said. Daunting, definitely, but I have to say, there has been a lot of goodwill and useful feedback already, from locals and passers by, but also from others in the Glasgow cultural scene. Particular thanks have to go to Victoria Evans (whose amazing show at the Briggait with Graham Lister and Stephanie Spindler can still be seen if you get down there for this Friday), filmmaker Alan Knight (check out his Buffalo Bill film project) Anna Gibb (whose work is, if you pardon the expression, just f***ing lovely) and Stuart Murray (whose blog I am happy to say, is back on the streets), all of whom have popped by or offered substantial help from afar. I’ve also been lucky enough to find an excellent team of volunteers. I’m going to talk about them in more detail in another post down the line, but they have been excellent so far.

It’s been an interesting time, especially as it has in some respects, encouraged me to look at Dennistoun almost as an outsider – fresh eyes, as the cliche goes. Stuff that was hidden from view suddenly becomes apparent, and I don’t just mean the seamy side- I had never been to a meeting of Dennistoun Community Council before and to be honest, I’d probably have never thought to if I hadn’t wanted something from them – something I’m sure the dedicated souls who sit on it month by month, year by year, are used to hearing, and probably a little weary of.

Speaking of asking for favours, if anyone reading this is a carpenter/joiner/welder with time on their hands and a cavalier attitude to remuneration (I am out of time and largely out of budget) I would love to hear from you.

Some dates though, for the diaries of those interested in seeing how it all pans out. On Wednesday 28th November I’ll be hosting Market Gallery’s Night School (6.30pm, main gallery) event on the theme of ‘exhaustion’. I didn’t pick it, but by that stage of the proceedings it’s going to be pretty apt. There’s a reprise on Saturday, at the art school union from 3pm.

And of course, there’s the small matter of the opening of the exhibited drawing itself, of which the scratchy sketch up there gives a sneak preview. That opens in Market gallery 1 at 6pm on Friday the 7th December. It will be on show for a week after that (and is free) until the 16th December. I will, with the exception of Saturday 8th, be invigilating it myself, so you will have the chance to come along and ask questions should you be so inclined.

Draw Duke Street has rather clouded the horizons of late, but there are other projects and happenings outside of the Independent Republic of Dennistoun currently on the boil, on which more soon.

At least, before Christmas, anyway…