THE GENERAL NEWS ROUND UP BIT

It’s been a while – a long while – since the last update, so I do apologise to my long-suffering followers. It’s been a busy time, mostly spent teaching at Edinburgh College of Art, so I have only just had a chance to get back to matters dialectographical.

Before I go on to unveil the second Red Road dialectogram, I wanted to give a quick news update. Derek Bainton, who has said many kind things about this blog and the drawings on it, wrote an excellent article in Varoom! Magazine, in which dialectograms featured. There is some great work featured there, including that of Stuart Murray, who has been mentioned here before.

Secondly, I can also announce that Glasgow museums are buying, on a piece by piece basis, the originals of the Red Road drawings  for the collection of the People’s Palace museum. The fee for each, while giving me some useful food token money, can also go to having high quality prints of the original made for the people who so kindly assisted me in putting the drawing together. These are generally much nicer than the original itself, which is pretty grotty after I’ve been pawing at it for weeks. The original will sit in the collection along with a digital copy for display and reproduction purposes, and will of course, be freely available for the public to see, which is very fitting, given how much the public contribute to their making.

Not quite lastly, I have been supporting Alison Irvine, author of This Road is Red on a library tour in North Glasgow. There are still 3 dates to come – the 2nd of June at Milton Library, 3rd of June at People’s Palace, and 16th June at Royston. Check the libraries website for more details.

Lastly, I am now a twit(terer) – you can follow me @Dialectographer

So, another Red Road dialectogram is finished; The Nivens from S(i)even was put together with the kind help and assistance of  the Niven family, residents of the scheme for 40 years. The Nivens moved out in 2008, and their flat is long gone but, with the aid of Bob Niven, whose memory is somewhat encyclopaedic, I was able to reconstruct his family home as best I could. Here is the result:

This was possibly the toughest drawing to date, largely because I had almost nothing to go on in concrete terms – just memories, glimpses in photographs and a general knowledge of what the likely groundplan. However, even this proved tricky, as finding the exact layout of the flat depended on what position it would have on a landing  – not all the flats can be traced in the surviving floorplans.

As far as memories go, it can get even more tricky. People tend to be vague in their recollection once they are at a remove. Recall is impressionistic, usually seizing on a particular, individual thing an forgetting or blotting out other day to day details that for some reason have not become so fixed in their heads. Whereas the Concierge Station was fairly scientific, in that I could observe for myself and ask questions about the details, the Nivens drawing was really about using their flat as the hook for a twisting, turning narrative of their time there – it’s an exercise in storytelling. The timeline at the bottom certainly contributes to the more linear nature of the drawing, as do the episodes taken from my interviews. In the concierge drawing these episodes- such as the Asylums strip, or the blow by blow account of evicting a family of troublemakers –  were intended as representative of workings in the scheme overall.

Whereas elements of the Nivens’ drawing shared some of these characteristics, most seemed to be about very personal experiences; Bob’s perception of the veranda as a ‘garden’, Anne’s horrific encounter on the local train or the recollection of old Florence who sat on the low wall outside the block. 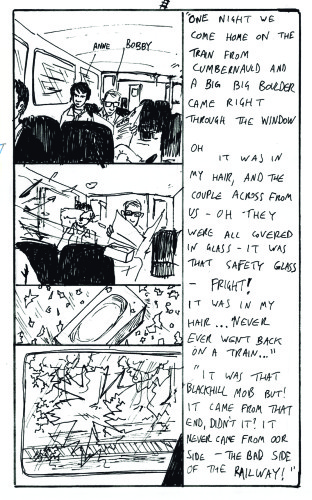 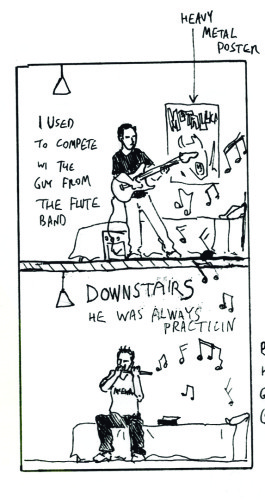 Having said that, there is still anthropology aplenty; asbestos and its dangers, the military manoeuvres of the local gangs and the draughtiness of life 7 stories up echo experiences gleaned from elsewhere in the scheme. 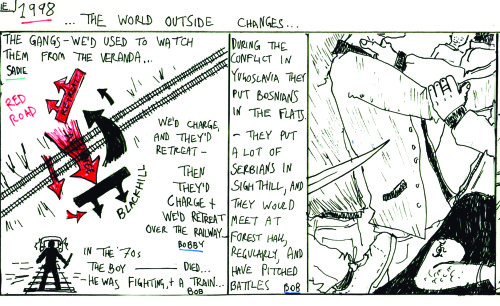 It is a much denser drawing, overall – not as much white space here, to be sure! So far it makes for an interesting comparison with the first Red Road dialectogram, indicating I think, that no two are going to be the same. There have been some nice surprises I’d like to explore a little more thoroughly down the line. Foremost is the entertainment centre cutaway. A group of GSA students who looked at my work noted how it is almost a graph, or chart of life in the flat, something I’d wished I’d developed further. True enough, a scan around the unit does condense and ‘crosstab’ a lot of detail about the family, but I could have got more I think, if I’d tackled this deliberately from the inception of the drawing. The lockers in the Concierge drawing also perform a similar function  – in fact, they look very like a bar-chart. 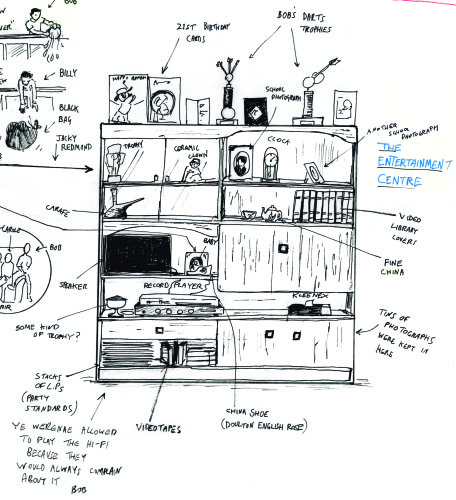 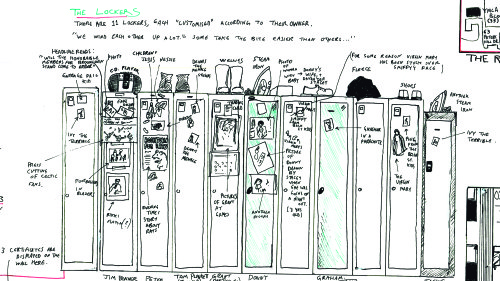 I showed Bob his drawing a few weeks ago – he went very quiet, but nodded a lot, which I am taking as a good sign. Next week, I will take him up a swanky art print of the original for him and his family, and see if his parents feel the same. Overall though, there’s not much time to pause and be pleased with myself – the Brig and the Bingo will not draw themselves (however much I may wish it was so).