The Dialectographer’s Bulletin #3: Nothing is Lost 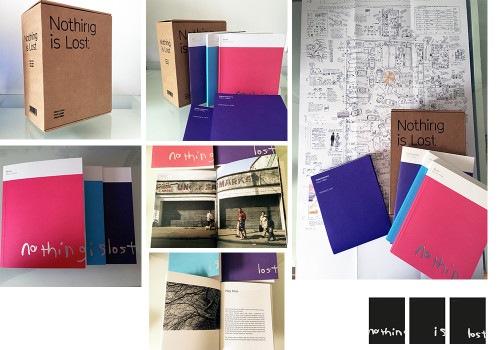 It’s been…a busy year! Three major projects have come to an end, another starting up, and there is of course, my Patreon campaign.

Today I’ll talk just a wee bit about the first of them – Nothing is Lost, a residency that has resulted in a book (os the same title), I co-authored with my frequent collaborators Alison Irvine and Chris Leslie. Nothing is Lost was I think, a very personal matter for all three of us who worked on it. For Alison, a writer whose research is scrupulous and dedicated to giving herself over to the stories of other people, I think it spoke to her of the importance of family to making place and sustaining city localities. Chris has been documenting city regeneration for years, in the east end in particular, so it was very much a continuation of his long term concerns with the ‘Glasgow Renaissance’ in the area where he raises his own kids.

For me, it meant initially going back to the work I had done on my own community, Glasgow’s travelling showpeople. ‘We’ form the largest minority group in the schools of Shettleston and Carntyne, and before the new housing that came to Dalmarnock, its largest group of residents. Yet this community – one that has been in Dalmarnock for forty years, and associated with the wider East End for nearly two hundred – has rarely been discussed, despite being directly in the path of Clyde Gateway’s redevelopments. As Alex James Colquhoun, the former Chair of the Showman’s Guild (based just over the river at Cambuslang) noted, not one member of the community made it into Commonwealth City the BBC Scotland documentary on the changes taking place in the Dalmarnock area. Not even the aerial shots that swept over Springfield Road, Baltic or Mordaunt Street or Dalmarnock Road itself captured a single one of the twenty or so yards that line Swanston Street, just a few yards away from all of these thoroughfares.

The work we did in Dalmarnock and on the vallies of the Cuningar Loop offered a degree of redress . The drawings I made represent distance traveled in settings familiar, unfamiliar and entirely new. They came from places I often believed I knew better than I did – Dalmarnock for instance, was a place I largely knew as the bit beyond the gates of the Showman’s Yards where I visited cousins and aunties.  The Barras is a big part of how I imagine Glasgow, but I had never gone into its back offices, nor had I sifted through the debris of neighbouring Schipka Pass (now colonised by the Barrowland Brand, via Jim Lambie). Going into the Barrowland ballroom in its off-hours, free of the sweatr and noise of a gig, revealed just how beautiful a place it is – an authentic East End pop-architectural gem. I drew whatever I could, but never quite fast enough to capture everything that was going on around me. Nothing is Lost shows the traces of a forlorn effort – but one that was immensely enriching

So what then, did the Games bring to the East End? A degree of examination and scrutiny of the city’s true historical centre did make it through the PR pickets.The  frayed edges, the  shameful statistics of poverty and conflict, the reality that the east is a part of Glasgow with a deep-seated and firmly held distrust of its city fathers -and a long list of grievances to support it – could not be hidden. Our part in that was small – collectives such as Games Monitor, and local pressure groups themselves providing the scrutiny necessary to counterbalance the happy-clappy Tunnock’s Teacakes carnival. I, like many other Glaswegians, got caught up in the atmosphere, enjoyed the walks down the Clyde to see the Hydro, sat on the Green in the sun. But I also had work to do, eyes to keep open.  We followed the Games as a much longer process; the months of preparation, the critical mass of the event itself and, most interesting to us I suspect, the aftermath. We came to this task  replete with our own conflicts and contradictions; not least that the artist’s residency was itself, supported by Glasgow Life, a major player in the organisation of the main event. That didn’t stop us speaking out – about, for example, the ludicrous proposal to demolish the Red Road Flats for the opening ceremony – but make no mistake, the ethics of being an artist in such contexts is complex. You have to take care, have to balance the desire to prevent unwelcome ties and restrictions with seizing the opportunity to actually make work, and offer comment. Even on the special preview night at the Merchant City Festival (30 July 2015) I was thinking about these contradictions, going back and forth on it. I think it’s important we do.

But the book now exists, and is easily got. We also have lots of nice stuff (and free, at that) on the Nothing is Lost website, so please do take a look. In closing though, Nothing is Lost was two years of my life where I saw parts of my city much more clearly, and met a wonderful range of people whose patience and help forms the core of our work. My thanks go out to all of them.

IN THE NEXT DIALECTOGRAPHER’S BULLETIN…

I’ll be talking once more about my other Commonwealth Games Residency, Games End, part of Collective’s All-Sided Games. Two cities, three dialectograms, one international event. Should be interesting….