In spring a not-as-young-as-he-was-man’s fancy turns to blog. It’s about sweet time it did, in fact, for, as blog-follower Derek Bainton pointed out in a recent email, dialectograms have been quiet of late. You might have been forgiven for wondering if I had imploded under the weight of tasks at hand.

Not so far, though it’s been a close call at times.

The silence is due to a very busy period. Firstly, novelist Alison Irvine has completed This Road is Red and I, doing my part, the inside illustrations and cover design. I fretted over the cover for ages, and only really got to like it a couple of weeks ago – after I had to submit it! – and now rather like it. As there are no longer any innocent to protect, please find below a selection of the earlier versions, leading up to the finished article, as well as the groundplan dialectogram specially commissioned for the book. 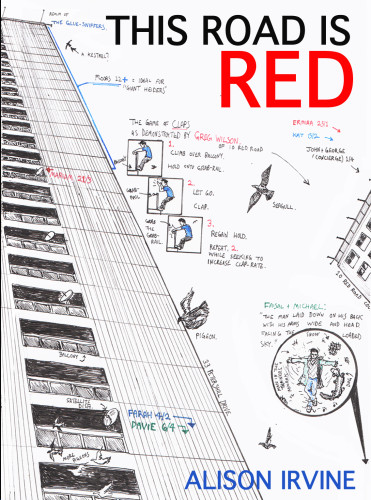 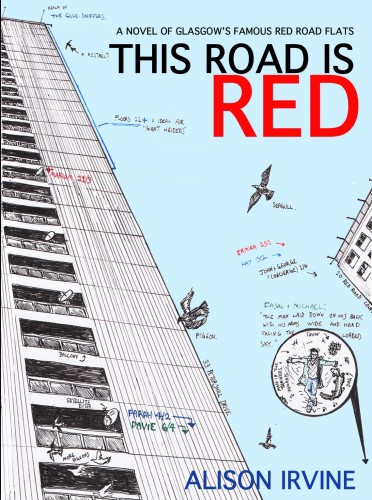 And here’s the finished version: 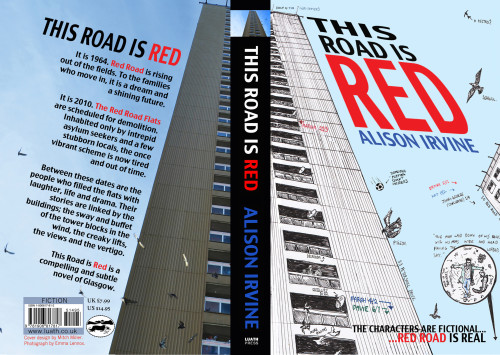 And here’s the groundplan that was reproduced in the novel: 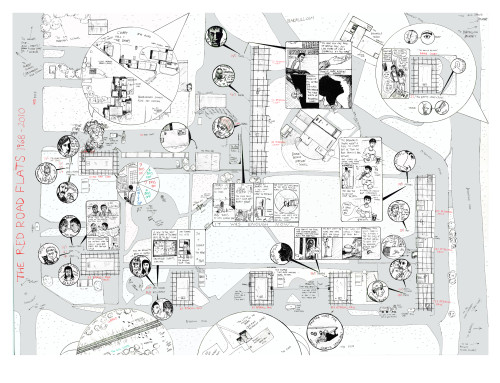 The book was launched at the Aye Write festival in my library (the Mitchell, that is…) with what must have been around a couple of hundred people in attendance and appearances from a number of those involved in all things Red Road – Iseult Timmermans showed some of her pinhole photography and portraits of the flats, Chris Leslie screened a film and slideshow made from trips we had made to the Red Road Bingo and the Brig Bar (see below) and I was also drafted in to give a five minute primer on the dialectographic process. I also showed, for the first time, the new dialectogram tables, as designed by Euan Elliot, a very talented carpenter and sculptor whose genius first became apparent when I saw a combination chair and cello he had made just to see if he could. His design of triangular tables was ingenious yet simple, and you can see here Emma modelling the Concierge table (and simultaneously standing in for the steel rod that supports it at an angle, which has not been fitted yet). The tops of the tables were made from prints done at the Glasgow Print Studio which I must say, were beautiful. Anyway, I love my tables and can’t wait to see them set up in other venues –and while I’m at it, if any of you need some carpentry of an unusual nature, let me know and I’ll put you and Euan in touch. 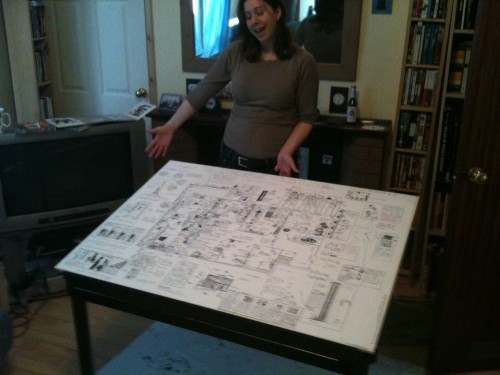 Alison and others read from the novel, and although she confessed she was nervous as hell, she looked every inch the relaxed author at large by the end. Having read the novel I can certainly recommend it; the authorial voice has a clinical honesty to it, and she handles her characters, each derived from real life with real sensitivity. I see great things in Alison’s future (and just hope she lets me grab a coat-tail or two as she goes) and feel I owe her a great debt; it was she who first suggested me to the Red Road project and who got me involved in the whole thing after a chance meeting at a wedding. It pays to be lucky.

That’s not all that’s been happening either. I appeared alongside artists Chris Leslie and Nicky Bird at High Rise: The Future in the Past, an event organised by The Drouth, sponsored by Glasgow School of Art Urban Labs and held at the CCA in Glasgow. The three of us spoke to our work inspired by multi-storey living to a packed Cinema 4 in CCA. It’s funny how the subject of high-rise is of such wide interest. The other day I spoke with four architecture students from Glasgow School of Art who were doing a project on Red Road and what I was doing there. Fiona and the rest of her group had some excellent questions that helped me refine some of my thinking.  On Friday, after Aye Write (and quite a lot of celebratory beers) Emma and I went for a meal near the Mitchell Library, where our copy of the novel took pride of place on the table. It was spotted by some guys who had just sat at the table next to us, and the Red Road association was immediately picked up by one of them had worked in the scheme. Like most Glasgow people he had strong opinions about the flats and a lot of questions about the novel and the whole cultural project. It was a friendly chat though – while the novel (and my illustrations, I noted) was perused carefully I suddenly had to field a load of questions about the scheme, what people like me were doing there, the current situation and other things I can’t remember now. I think I got at least a couple of potential buyers for the novel, in the process.

The other event I should mention was a special group exhibition ‘Telling Stories’ at Market Gallery, where the Concierge Station was asked to make an appearance. The show celebrated narrative and illustrative traditions in Scottish culture with a line up that was frankly, intimidating, including David Shrigley and Frank Quitely, whose ‘The Greens’ parody of a well known Scottish comic strip family is still one of my favourite independent strips. Stuart Murray, a good friend of this blog also had a selection of drawings on show. As per usual I was ill on the opening night and felt distinctly spaced out by the whole affair. Frank Quitely was in the room and I, being terrible at approaching people I admire out of the blue, failed in every conceivable way to just say hello to Frank (or is it Mr Quitely?) despite the urgings of Emma and a nice chap with a compendious knowledge of comics who showed no such shyness. Mr Q cast a brief eye over the Concierge Station and I’m not sure he was that impressed actually, so probably as well that I kept to my part of the room in the end – could have been embarrassing for both of us. Overall though, a fascinating show and a real honour to be a part of it – beyond the star turns mentioned above I’d especially recommend tracking down the work of two other Millers, John and Rob, Innes Smith and Sorcha Edward’s stuff. I also premiered the Red Road Chapbook, which seemed to be getting snapped up pretty quickly on the night.

Lastly, in terms of glittering celebrity ‘look at me’ announcements, Stuart Murray and I are to appear in an upcoming issue of Varoom! feature on illustrators and the urban environment by Derek Bainton. Don’t know more than that for now, but looking forward to seeing it.

But beyond all this attention seeking, have I done any actual work, you ask? Well yes. Firstly, I have been donning a hard hat and venturing underneath Red Road into the fabled bingo hall and Brig Bar. We had been told there was not much to see in these spaces since flood and fire closed them forever, but that is very much a matter of opinion; these places are a treasure trove and will be the basis of my third and fourth drawings. The bingo is well underway and I sketched out the brig on site, resulting in a very confusing – and intimidating groundplan in embryo.

Astute observers will have noticed that I mentioned the third and fourth dialectograms – what about the second? The answer is it is very nearly, almost done. The pics below shows, in process, the Nivens from Seven, a reconstruction of the home belonging to Bob Niven’s family at 63 Petershill Drive. It will be finished very imminently, after which I will move onto finishing the bingo and starting on the brig.