(So here’s the second part – more about the context this time. Both the entries are from impressions I jotted down on each day, and then revisited and reworked a few days later.) 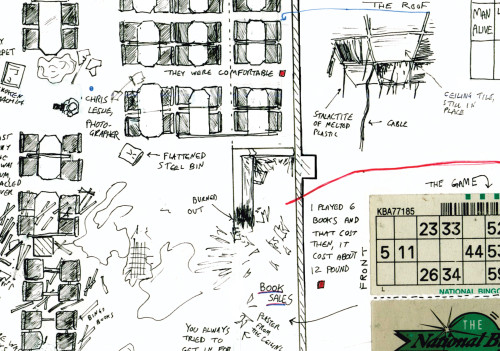 Saturday is mostly about getting back to work – at least, that was the intention – but it is really my first chance to seriously think this all through. Chris’ argument, ever pragmatic, is that Glasgow City Council has opened up a line of inquiry they maybe didn’t intend and that this stunt (and until I see evidence to the contrary, stunt is what I will call it) will force everyone to engage in a debate about the realities of Glasgow’s apparent Renaissance/housing crisis.

I agree as to the opportunity but don’t quite share the optimism. Glasgow has a difficult history with its history, in which advances it makes in coming to terms with the past are frequently undone or drowned out by boosterist rhetoric. Think of the early era of the People’s Palace and its groundbreaking engagement with social history in the 70s, and then consider how those efforts were snubbed during Glasgow 1990.

As Alison says in the blog she posts today, the spectacle undoes the legacy of the Red Road Flats Cultural Project and its ethic of care and respect. The project had to deal with considerable internal contradictions, multiple stakeholders and complex material – and to my (biased) mind, pulled a lot of it off. It feels now, that despite lip service to it by many of the players here, they are all to happy to ditch everything good and honourable in the undertaking for the sake of the wow factor.

Also – and this really is selfish of me here -I feel the Games have made a liar of me. I bargained my way into concierge stations, front rooms, North Glasgow boozers and kitchens on the promise that I would not stitch people up and show some respect.  Retrospectively, I have become the vanguard of a colonising force that has took all of this history, experience and nuance as their property, then sold it back to those same people as spectacle.

So just to reiterate, it’s Saturday and I am spending much more time in my own head, thinking about the words and phrases used by Cllr Matheson. ‘Bold…’ and ’So Glasgow’ stick out in particular.

Now, we could debate the conceptual emptiness of the statement ‘So Glasgow’ for some time, but let’s operate for a moment, on the principle that it might actually mean something– because, actually, in everyday parlance, there is a meaning that tends to be attached to that phrase.

And on analysis, I actually find that yes, I agree: this is both ‘bold’ and ‘So Glasgow’.

Yes, this is definitely, undoubtedly and indupitably bold. Bolder than Arial Black, Gill Sans or Helvetica racked up to 72 pts, and then put in bold. It’s just hoaching with boldness, boldery and boldicity (some of those words aren’t real by the way). Actually, this is a solid argument from the Games Organisers. Blowing up 3000 homes as part of a big party is definitely bold.

But so was Red Road, in its day. In his designs, architect Sam Bunton channelled Manhattan tower blocks in his masterplan for the Barmulloch cabbage-patch. Horribly squalid single-end tenements were swapped for bathrooms, central heating and the most remarkable, if terrifying views of the city.

Red Road was bold. And so its first, good years began. It was also costly, over-ambitious and starved of facilities and resources. Its people did a magnificent job of building a community there, several times over, but ultimately, in the end, the housing scheme failed because the boldness of the original idea was not matched or followed, by a well considered or thought out plan for what was going to happen next. The response of the landlords vacillated between neglect and sticking plaster remedies.

There are some excellent blogs and articles here, here , here and here that give plenty of context – and of course, this. But it brings me to my point about the symbolism and philosophy at play here. Do we really need more bold? Do we need the boldness of swapping the relative dignity of euthanasing the flats in a simple demolition into a glitzy public ritual execution ? Does this indicate any learning here?

It is true that there were design issues with the Red Road scheme.  But walk into a contemporary West End or Southside close, stop on the stair and try if you can, to imagine the shared cludgie, or the middens, or the horrific overcrowding. We too often mistake issues of design for those of philosophy – and the prevalent philosophy has, in this city, been a bold one of slash and burn, boom and bust, build and blow down. Demolition and cheap rebuild is altogether more lucrative, hence the rejected Glasgow City of Gapsites slogan (oddly, it never caught on…) Red Road has been beyond that sort of intervention for a while now, but the underlying attitude to buildings and building in this city desperately needs to be re-examined. It’s easy to blame architecture and the architect for housing problems. It works very well for every one else who deserve a share of it.

Bricks and mortar is scapegoated, social failure unexamined communities erased, rather than tended or nurtured. Ask yourself, for example, why in Singapore or Manhattan, high-rise successfully houses thousands of people, but not here? The answer is, to put it a little crudely, infrastructure, investment and maintenance. In Singapore a tower block has its own shopping precincts (usually every few floors or so) and trains that stop in the basement. In Manhattan, you can walk out the lobby of a high-rise block and find anything you could possibly conceive of ten minutes away in any direction. And money of course, for maintenance, upgrades and improvements. There was little of that at Red Road; there were finance issues from the very start and, while the Barmulloch cabbage patch seems further away from the city than it actually is, it feels very remote. There’s just a bar, a bingo, a bookies and a smattering of shops and little else to feed or enrich the community.

Today’s urban theorists write of the need to support new housing development with ‘ecosystems’ and organic infrastructure – decent shops, parks, libraries, swimming baths. The old slums at least had this in easy reach, and you’ll find no lack of it in the West End or Southside. This element contributes to the remarkable resilience of places like Govan. Take a wander round the new schemes that replaced Red Road and you’ll find sweet bugger all for a good way, just house after house with nothing to do around them. There is of course, a Tesco near the motorway, en route to Sighthill.

To sum up, even as the blocks soared, Red Road struggled at ground level. Political, economic and social failure was the real design flaw.

Our city has been really very good at bold ideas, big, massive gestures, one after the other, reinventions, rebirths, regenerations, renaissances, rebrandings. We gesture, gesticulate and gyrate like no other. It’s a repeating pattern, an addiction to spectacular history that, if Glasgow were a person, would have long ago landed it in therapy, or jail or intensive care.

We’re BOLD. And yep – that is SO GLASGOW.

There are two senses in which the Glaswegian (or other informed observer) tends to say ‘that is so Glasgow’. One is with a grin, the other a grimace. And just to dispel any suspense here, I’m saying this is so Glasgow because we’re very much not waving, but girning.

It goes back to my fears about how we are treating our history, and using it. The history of housing in Glasgow is vexed, complex and at times, not especially edifying. Sober reflection, humility, even penitence are what should accompany the Red Road demolition. Not WOOHOO BIG BANGS! Go and look at the facts, the legacy and narrative of just Red Road alone (never mind housing elsewhere) and tell me if you can, why the city fathers should get to retrieve a victory from this?

Ok, so maybe that’s a bit spiteful – hating the council and related organs is already a popular bloodsport sport in the city. But the logic of this narrative would appear to be: it’s ok to  blow down of 3000 homes that represent some of the most vulnerable, beleaguered people in our community on live TV because We Are All Better Now. Glasgow simply doesn’t make mistakes like this any more.

But here’s the thing – leaving aside some of the worrying signs apparent from their current  new builds –  has no one who sat in on those meetings looked up the dictionary definition of hubris? Even the best-informed and thoughtful among us act in the hope we are doing the right thing, rather than any certainty of it. People’s futures, and their sense of the past are at stake. This gesture fundamentally lacks the necessary humility. It does not speak well of the state of mind of those planning for the ‘what next’ after the demolition takes place.

We come then, finally, to the  question of how we construct our own histories. I hear a lot about ‘authenticity’ from supporters of the stunt, but see little evidence to back such a claim. That so many of us were reeling from the news, working out how to react on Friday does not bode well for a genuine debate over how this story will be told , and the people who could help the organisers tell it – the locals and residents – were among the last to know. They have been excluded from the debate, so it’s no wonder that when the majority of them do now get heard, their reactions are angry. Instead we have been told we should trust the organisers in their claim that the blow down will be contextualised carefully and all make sense on the night. And just to reiterate, that is all we have been told so far . Trust us, Danny Boyle’s been on the phone, it’s grand. We’ve got this.

There is altogether too much at stake to let the organisers be coy here. To hell with spoilers: we need to know what is intended for this ceremony, what is planned before and after that 15 seconds of Boldness. ‘Authenticity’ does not come from cooking up a narrative in committee, then springing it on people where they have had no time, or proportionate facility to respond. It comes from dialogue, from dealing with contradictions, from arguing about it.

And while we have plenty of responses, and arguments at the moment, they all fall short because any debate is disfigured by secrecy. To go back to that old problem of the neoliberal city – what is the plan? Is there one or are we just going to gesticulate (again), feel good for five seconds, then spend years picking up after ourselves? Furthermore, if the Games’ organisers really have “got this”, then surely there should be no problem in opening up what this narrative, and the tone in which it is delivered should be for wider discussion? Some of the deeper philosophical problems would remain, but it would be altogether better, altogether more respectful, than at present.

Of course, as my late night twitter debate-buddy (see part one!) astutely pointed out, once you author a narrative you don’t necessarily get to control it, how it’s interpreted, how people see the subject. I think the Glasgow 2014 folk and partners may be finding that out already, and that this triumphalism represents a very pyrrhic victory. Chris may yet prove to be right.