On Simple Prospects, Red Road and Spectacular History. Part One…

(So I finally got round to blogging my thoughts on Red Road. Too much for one post, so I’ve split it two ways. There have been a lot of very good blogs and articles summing up the wider context already, so these will be more of a personal account) 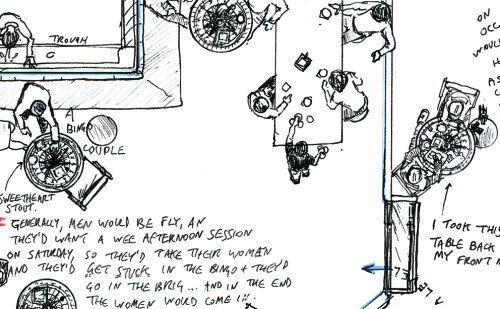 Some days offer a simple prospect. i.e: painting the bedroom. Sure, you face a day of moderately hard labour, but you know how it’s going to go; get up, put your old clothes on, inhale paint fumes, swear when you go over one of the lines, despair momentarily when the stretch of wall above the dresser suddenly takes on the properties of the Forth Bridge, realise why you generally don’t listen to afternoon talk radio…(always in that order). When it’s done, you’ll be stinking of turps, light of head but the task is completed. Cue warm sense of achievement and appreciative significant other. Possibly a beer.

There’s a lot to be said for straightforward days, of simple prospects. I generally don’t get a lot of them (I think few of us do).

My Friday was supposed to be straightforward. I had something big and complicated to write, and wasn’t going to leave my desk until it had been done. I’d made my coffee, suitably cerebral music had been selected, the cursor was winking – a painful, but honest day of work beckoned.

And then, Chris Leslie emails Alison Irvine and I with the news that five of the Red Road Flats were to be demolished as part of the Commonwealth Games opening ceremony. Chris is a man of pithy expressions, and he catches our feelings perfectly with – ‘wtf?’

A spray of coffee and a flurry of emails later and we are still shaking our heads – surely, SURELY this is a late April Fools? I start to get texts, Facebook messages but I cling to this explanation (even though it was the fourth of April) in the hope I can just go back to work, until Chris posts this press release that confirms it all.

An hour later and, I’ve written something, but it’s a tweet:

Friday as it turns out, will be all emotion, all about the gut and the wagging tongue. About taste, and lack of it.

And personal ethics – lines and limits, getting to that point where you have to speak your mind. I’d spent the best part of four years working with people at Red Road, trying to understand and transmit the complexity and nuance of that experience as part of the Red Road Cultural Project. It felt to me as if this stunt negated all of that, everything it had achieved.

Even at a superficial level, that of message, image, Pee Arr, it just seemed insane. How could Glasgow 2014 possibly think a televised act of destruction was okay in a post 9/11 world? How exactly, does the creation of a new gap site at the very moment the Games begin, support the claims  that this an event about rebuilding?

I start to hear from the Red Roaders I know. They were none of them in favour. There is bewilderment, and anger. Most poignant was in what they don’t say – perhaps can’t. Some say they are glad they are not alone in feeling this way.

Twitter explodes, as does Facebook. An online petition is raised with lightning speed. I am surprised at just how many others also seemed to feel, at the very least, profound unease about the whole thing. Even my brother seems to agree with me. Chris (always, always first to the post in the Winning City Team ) makes his response. I agree with most of it, not all.

I mull over my own response. I’ll have to make one. Alison, Chris, myself and others who worked at Red Road  made career-changing artworks on the sufferance and kindness of its people. I feel it would be unethical – cowardly – to duck out of making a comment. But I’m not quite ready to put my thoughts down yet.

I am in truth, still reeling. Crass and insensitive – those are tonal criticisms; there are I feel, deeper issues to be teased out. Beyond the emotions, it’s hard to get full clarity. Glasgow 2014 and its partners have dropped a big secret on the rest of the city, which now has to do its best to form an opinion with precious little detail as to how this event will be contextualised, or explained. Even with that pre-planned advantage, they seem to be struggling. I wonder if they were ready for such a strong reaction?

Another frequent colleague and collaborator Johnny Rodger gives me a call. He has been asked onto Radio Scotland’s Culture Programme to debate Bridget McConnell. We talk over what we both know about it, I advise him to check out the Glasgow 2014 Press release. He hasn’t had much time to prepare and his counterpart has known about this for some time – that tends to be how the cards are stacked in these affairs. Still, JR is a walking encyclopaedia on the broader history of Glasgow’s urban fabric. He’s got the ammo.

At lunchtime, in the Co-op, I meet a good friend who works for one of the partner organisations behind the decision. We talked about the reactions, I hear a little bit about it from the other side of the fence. My initial feelings remain unchanged.

I eat my lunch, listen to Johnny on the radio. He holds his own rather well. He makes the point about 9/11. Really, how did the planning committee NOT think of that?

I tweet some more, go back to work, take more phone-calls. One is from Scotland Tonight, inviting me onto that evening’s programme to debate Gordon Matheson and the comedian Robert Florence. The producer, is terribly nice; I don’t quite know how to refuse. I ring my wife hoping she’ll tell me not to be daft, and get back to work but she thinks I can and should do it.

So I shear the beard a bit (it’s gone a bit Walt Whitman) locate the suit and try to prepare myself for my first ever appearance on live television. I don’t tell my mam – I’m worried it might not go well.  Surely, Matheson will have been PR-prepped and deflect my irritation with ease? I nearly cancel a couple of times, but feel an odd sense of moral obligation to go ahead; I’ve been proclaiming solidarity to Red Road residents all day, in conversation. Time to do it in public…

11pm and I am still at STV. My wife and I drink beers in the green room with the production staff, Robert Florence and presenter John MacKay. We’ve just been on, and are watching Cllr Matheson do it all over again, this time for Newsnight Scotland. I don’t envy him – the Beeb’s interview has much more of the bear-pit about it.

It had been the Rab and Gordy show really. Robert Florence used the opportunity somewhat cannily, as leverage, extracting promises from Mr Matheson to meet to discuss the refurbishment of the Springburn Winter Gardens.  I’d been up at Red Road the previous weekend – the area badly needs facilities and pleasant spaces, so I hope it is successful. And, well, the Games could use a PR win now…

Home, and to bed, feeling guilty about what has been unwritten and heavy of heart over the reason why. I am tired but unable to sleep. I scan twitter and fall into a debate with a user who defends the plan in the most erudite terms – Gramsci, Althusser and Barthes all make an appearance, in gobbets of 140 words an all. I enjoy the ‘conversation’ – after a day of soundbites and PR-bombshells, it’s good to get some substance, talk about the deeper themes. But I wish my brain were working better. We amicably agree to someday, finish our “conversation”, and I turn my phone off.

It has not been a straightforward day.