On the 25th of November, I exhibited at One Night Stand, a one-night-only show at the Telfer Gallery with Mag Chua, Sarah Laing, Stuart McAdam and Minka Stoyanova, curated by Dane Sutherland. The show was a culmination of a very short two week residency we were invited to participate in, which began with no fixed ideas and in a sense, ended that way too.

The work on display was a varied and interesting take on what exhibitions do;  Sarah’s beautiful floor drawing that offered the dilemma of whether to talk on it or jump over it, Minka’s ingenious webcam summit, Mag’s solicitous offer of handwarmers and Stuart’s distillation of the whole art-opening experience. As for myself, I decided on a you-know-what, with a bit of a difference; 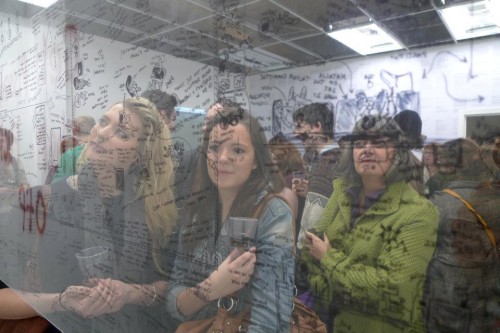 (Thanks to Mag for the photographs – I can’t take pictures for toffee. Or fudge, marzipan or nougat, now you come to mention it)

As you can see, I did this on perspex with fine permanent marker- an interesting experience! If nothing else, perspex is slippery stuff.

The idea was to create a drawing in three stages. The first is this one here – which depicts the past 13 days of discussion in the gallery itself. You can see that better on this picture; 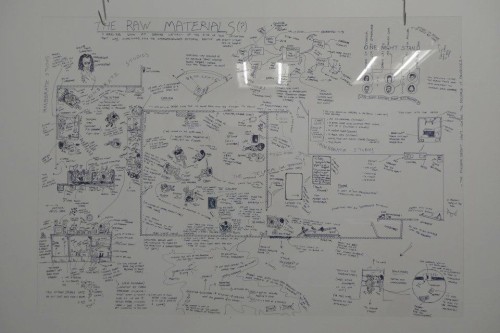 The perspex was hung from the ceiling, which created an initial illusion of it being hung on the wall. A second perspex sheet, with just a basic floorplan drawn out was provided on a table and chairs in the gallery itself – you can see here how it was laid out (if you ignore the grinning fool to the right). 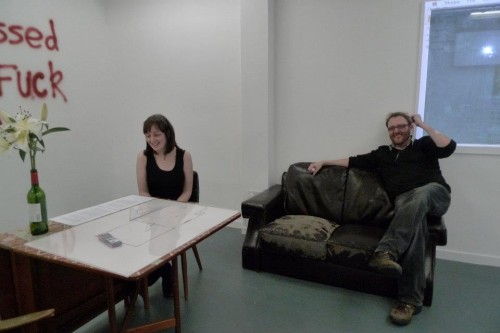 All the visitors on the night (and there were loads!) were free to use the marker pens provided to add their own notes, drawings and experiences to this plan, hopefully taking the original as a cue. You can see the result here (this is my photograph and is, as a result, rubbish) after I hung the second sheet over the first at around 9.30 in the evening. 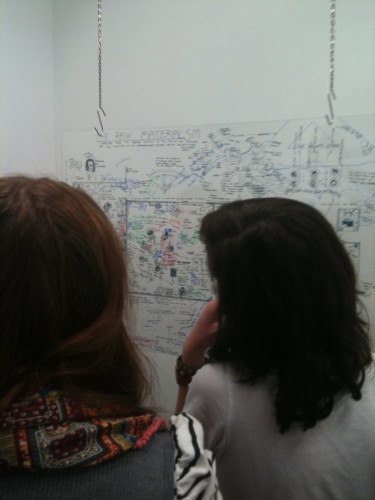 What you can hopefully see here is that of course, many people effectively ‘drew over’ my original drawing. Some tried to be ‘dialectographic’ themselves; others drew cartoons, silly stuff and so on, all of which is fine and to be expected perhaps, at an event that was a not always comfortable mixture of opening night and exhibition. From a ‘fine art’ perspective the result was perfectly alright and visually interesting in itself. From a design perspective rather problematic, as the drawing lost its readability.But as an experiment, it was hugely valuable and has given me plenty to think about in terms of making the drawing process more collaborative and open. This will not be the last time I use perspex…