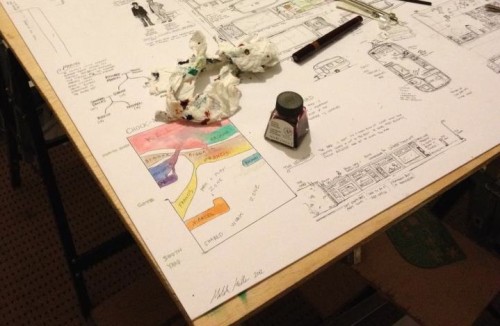 It’s been April – I’ll say that again – APRIL, since my last post, so I thought it was loooong past time I made an update.

Looking back on my last post I realise with some embarrassment that I was supposed to give full commentaries and background on the past two dialectograms. I’m not going to do that today, but do promise to get these up as soon as I can.

Instead, I’m going to get up to speed on what’s actually been happening these past few months. I think it is fair to say I have not been idle! As well as keeping things ticking over on the PhD, I’ve been looking into potential sites to draw, was a guest of the Royal Geographical Society Annual Conference in Edinburgh to talk about Red Road, and giving a paper at the Drawing Research Network Conference 2012 in Loughborough, where I met other researchers who like to draw, and talk about it at length. Sometimes great length.

Occasionally, I  got around to actually drawing something. So, the first major event of the last five months was in May when I joined with others to Go Tell it On The Green at the People’s Palace. I collaborated with a distinguished line-up of Peter McCaughey, Ross Sinclair, Roddy Buchanan, Johnny Rodger, Michael Mersinis, Gordy Munro and Raymond Burke. Go Tell it on the Green marked the demolition of Douglas Gordon’s 1990 artwork Proof, a hidden monument that marked, rather gnomically, Glasgow’s scurrilous and largely occluded radical history, encompassing the Weaver’s strike of 1787, the ‘Radical War’ or Scottish insurrection of 1820, female political activists during the first world war and anarchist Guy Aldred’s campaigns against the prohibition of political meetings and public use of the Green. In the same year as the artwork’s creation, widespread public anger and a sustained campaign led by Workers City defeated plans to privatise whole swathes of Britain’s oldest public space. A surfeit of symbolism, I’m sure you’ll agree – especially as its demolition (by Network Rail for Health and Safety, before a campaign could even be mounted) occurred in the same year that the Council tried to impose entertainment licences on small exhibitions and events, while simultaneously buying into the increasingly odious PR guff around the ‘Glasgow miracle’.

I’ll de-rant for now, but full details, including film of the talks by Emma Lennox can be found here. The event was also about trying to stimulate further interest and discussion in the hidden history the mural represented. My own thoughts in this direction led me to consider the surface of the Green as a giant, but somewhat impenetrable, recording device for these movements (in both senses) on the ’m not very pleased with this drawing -really just a germ infecting the germ of an idea –  but I see it as the first iteration of something  I intend to pursue much further and will hopefully, open up new possibilities for drawing in tandem with site specific work, using sound and geographical positioning, Expect to hear more, soon. 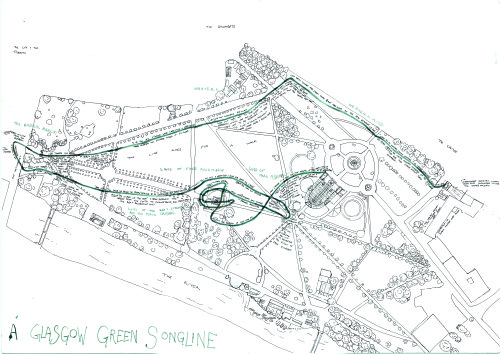 Speaking of public outcries, it’s also worth mentioning the right stramash that took place overCreative Scotland. The ‘more-than-just-a’ funding body has been in the spotlight of late, as serious critical debate and conversation around how the arts are funded moved from Variant – where it has been consistently criticised and investigated – to centre-stage. Pun intended here – the catalyst has been from among the theatre sector and the removal of flexible funding from these organisations.  Variant has been told it will no longer receive funding from Creative Scotland – check here to get their take on it and if you feel so inclined, assist their efforts to resume publication. For in-depth, accessible, intelligent and ecumenical analysis of the situation check out Stramash Arts for a blow by blow account of this year’s events.

Of course, it’s not all been politicking this year. There was also The Wedding Game, a collaboration with fellow One Night Standee Minka Stoyanova. Glasgow Green and the People’s Palace have a magnetic attraction for me, I think. Our collaboration was  Minka’s brainchild as a contribution to Shotgun Wedding, a show by the Effort Collective. This involved drawing a dialectogram-style game environment and characters for Minka to set the events of an adventure/puzzle game premised around trying to spirit a bride, groom (and yourself) from the mother of all Glasgow weddings.  Minka is now working on the finished version, so I’ll pop up the link once it is finished. 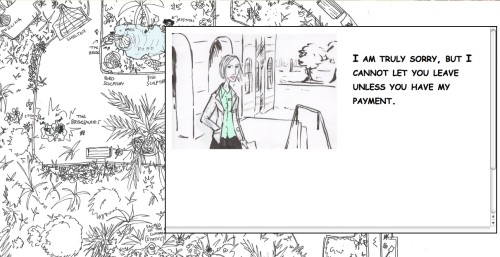 Then there’s SeRTES, an Information and Communication Technology Research Project involving 7 universities and a range of different disciplines. My attitude to ICT is fairly straightforward; if it works, and does the job I want it to do, I’m happy. This attitude is however, having to change with a new piece of work I’m doing with the SeRTES group to investigate how technology is used in the everyday environment – where we access it, how it blends into our current surroundings, and so forth. It is really interesting stuff, and nice to get back into drawing fully domestic situations (it’s been a while).  You can see the first of a series of sketches I’m producing to help the group with its research here, based on the ‘measurable unit’ of a weekend. The involvement has given me some excellent ideas for how I might work on a series of domestic dialectograms sometime in the future. 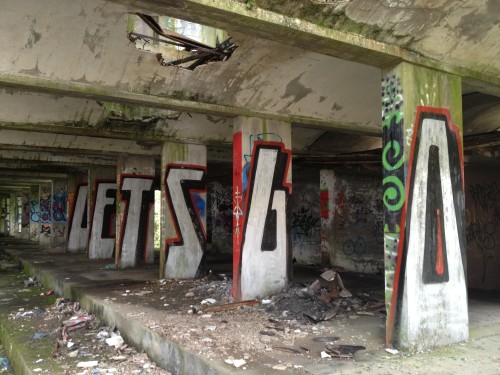 One of the most exciting things to happen, work-wise, this summer was my visit to The Seminary at Cardross, courtesy of The Invisible College. I am going to be quick on this one simply because this demands a post all of its own. Geographer Hayden Lorimer kindly invited me to come along on The Invisible College’s daytrip and evening workshop to Kilmahew park, location of the ruined Cardross Seminary.

The next update will be along very soon, as I have a rather important announcement to make, but before closing, I want to point you in the direction of VAROOM!LAB and Swansea Metropolitan University’s Spatialising Illustration Symposium in Swansea, on the 24th and 25th of January 2013. I am headed to this event run by Derek Bainton, a good friend of this Blog, and Varoom! magazine.. All the information for the event is included below– the call for papers is closed (sorry Derek for not distributing this sooner!) but worth going to, to hear about recent work and research in this area. 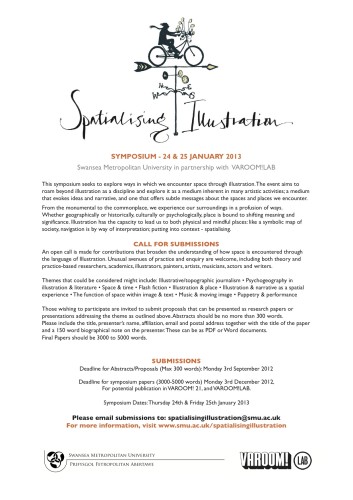